Medellin is beautifully nestled between two impressive mountain ranges.  It crawls through the valley and up the sides of the mountains like a group of red brick ants.  The “Land of Eternal Spring” keeps it at a warm 22 – 27 C (mid 70’s to low 80’s?).  The rain often rolls in around 5pm to cool things down before the night begins.  The city has a metro that runs the length of the valley and two cable cars that run up each of the mountain ranges.  One connects the poor neighborhoods to the city, the other takes you up to a vast national park.

Our first full day in Medellin we headed out to the Jardin de Botanico, a beautiful park in the city that is free to enter and on Sunday is full of families and groups of friends out enjoying the sunshine.  We spent a good couple of hours wandering the gardens and some time just chilling, taking it all in, remembering how lucky we are to be doing what we´re doing.

The next day (after a late night out) we decided to stay close and head to Parque Berrio.  Fernando Botero is a famous Colombian artist who is well-known for his disproportion and large depiction of people and animals. He was generous enough to donate several of his works to the local Colombian art museum, which includes a large collection of statues.  We actually got caught in the rain while we were trying to visit Parque Berrio, where the statues stand and were reminded of just how much we hate the rain.  The 80 degree heat had us in shorts and flip-flops and we were in no mood to suck it up.  We made our way into a library/museum which served little purpose other than keeping us out of the rain.

A visit to Museo Antioquia a few days later, where a large collection of Botero’s art is displayed, made up for our nonexistent motivation to culture ourselves our first day out, in the rain, hungover.

Pablo Tour
How can you not do a Pablo Escobar tour while visiting Medellin?  For only 30,000 COP ($15) we piled in the back of van and had a local tell us the history of the famous drug lord.  The tour took us by several of Pablo’s buildings and one of his houses.  They are constructed in white to pay homage to the occupation that gave him his wealth.  His house (one of many) could be mistaken for a small hotel.  The government has taken over these properties and hasn’t really done much with them.  According to our guide, there is a Colombian law that anything taken from the drug business is to be sold/used and half of the money is to go back into the community.  The government not wanting to part with the property or give up any cash, has found a loophole.  By not using a majority of the building (only one story) or any of it at all, they claim they don’t need to give money to the people.  The tour ended out front of Pablo’s aunts house where he was shot and
finally to his grave. 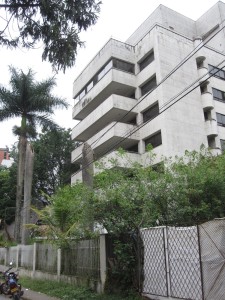 When he was alive, he owned a huge estate in the conuntry side where he kept a vast collection of exotic animals to include several hippos!  After he was killed the government took all the animals to the Medellin zoo, leaving only the hippos behind.  His hippo collection is actually still roaming the jungles of Colombia.  The estimated number is now at 37 (with the reproduction).

Parque Arvi
We took the half hour gondola ride up to the national park.  With our lack of Spanish, we were overlooked by the welcoming committee and missed out on a map of the park.  We were having a “constructive debate” about which direction to go when two middle-aged women approached and asked if we spoke Spanish.  We informed them that we didn’t and were surprised by one women’s perfect English.  Jennifer works as an interpreter and was wondering if we knew where we were going.  It turns out the map wasn’t overly helpful to them, as they couldn’t orient themselves.  Thus, we found some park friends and set out together.  The women were interested in visiting the police station at the top of the park and had talked a policeman into giving us a tour of the police grounds.  The station is almost 100% self-sufficient.  The gas is created from the horse shit.  The water they use is recycled and dispersed into the woods.  Solar panels were used for their electricity and
the entire building was constructed using local recycled wood.  Our “guide” was eager for us to meet all 50 of their horses as well as the eight or so dogs.  After forewarning from the officer about the danger of leaving the main path, we set off to see the view of the city (about a 45 minute walk).  unfortunately the viewpoint was obstructed by the hazy weather.  Interestingly enough there were two mounted police at the end of the path that gave us an escort back to the police station once we were done taking pictures.  The fact they thought they needed to escort us made us wonder just how bad the crime can get in the park?  Funnily enough, we met an English guy a few days later who was robbed at knife point by four kids from the nearby barrio, one of which wore a Bin Laden mask.

The frustration of not being able to speak Spanish finally came to a breaking point after the “ticket incident” on our way from Santa Marta to Medellin.  After a long discussion with a couple of backpackers that were once in the same boat, we decided to sign up for Spanish classes.  The owner of the Black Sheep hostel (where we were staying) Kelvin, had a Colombian wife that had a great reputation for teaching Spanish.  We signed up for a two-hour session and by the end of it decided to schedule four more sessions.  Turns out that there is more to Spanish then just throwing an “a” or an “o” at the end of english words.  Yadi definitely lives up to her reputation and we are both thoroughly enjoying our classes with her.  We still have a long way to go but she has given us plenty of material to work with.

After spending seven days in Medellin, Bret and I agree that it is a gorgeous city with wonderful people who are friendly and always eager to help although it took us a little while to get used to all of the stares (being gringo and sticking out like a sore thumb in our shorts and flops while everyone else is in jeans).  We stayed at the Black Sheep hostel in the Poblado neighborhood and would highly recommend this place.  The rooms are spacious and clean (always a plus) and there are a number of great spaces to chill.  Kelvin puts on a bloody good BBQ every Sunday night where for only $6 you get chicken, steak, sausage, grilled veggies and several fresh salads.  That Sunday was the best meal we’ve had in weeks!