There are places that are traveling attractions and there are places that create attractions in the hopes to be a place people travel to. Anaheim isn´t exactly on the top of anyone´s must see city list, but Disney Land keeps the tourists pouring in. Huacachina residents have devised a way to put themselves on the traveling circuit, bringing hoards of travelers to a 12 block town that would otherwise be as exciting as being magically whisked away to Delaware.

Huacachina is nestled in the middle of a giant mountain range of sand dunes. The town itself is almost exactly the way Hollywood portrays the hero’s hallucination of finding water in the desert after walking aimlessly for four days. A small “lake” of water is surrounded by restaurants, hostels, and dune-buggy/sandboarding tour companies. The original plan was to stay two nights and three days. After doing a 10 minute loop around the town we tried our best to get everything done in a day. But with 15 hours of bus time under our belts and the bus out being another 12, we decided we would stay the night and leave the following evening. We spent the rest of the day planning our escape and how we would chew up the time we had remaining. The only thing to do in Huacachina other than drinking and eating is the dune-buggy/sandboarding tour. The tour its self takes about two hours, leaving no other option than to find the cheapest watering hole.

We booked our tour for 4:30 pm so we could catch the sunset and be out in the sand at the coolest time possible. The late 80´s converted GMC Suburban was stripped down with a roll bar installed and was able to pack in 10 people. The cracked snowboard with boots two sizes too big or small in Sally´s case (explanation later) cost extra and was reserved only for “professional” sandboarders. Those who were on a budget or in hindsight smart enough not to be suckered in, went with the traditional board. This was a piece of wood shaped like a snowboard with velcro straps for bindings.

We had heard of wild and crazy drivers that were determined to stain their seats with gringo shit, but the company we chose to go with didn´t seem to employ any of these. The options consisted of two old 70+ men that I´m pretty sure wouldn´t pass an eye exam and the owner of our hostel (about 40?). We jumped on the owners truck and quickly got the vibe of an individual that was jaded and uninterested in accomplishing anything but the bare minimum it took not to get a bad review. A ten minute putt up the hill and we arrived at our first bunny/practice hill for sandboarding. After being “sized” for our equipment earlier in the day, the massive pile that was tossed on the sand created enough havoc for those individuals unhappy with their fitting to be opportunistic.

Chick who I am sure ganked Sally´s boots: “Ugh, I like can´t find my stuff.”

One of three dudes who more than likely stole my shit: “Just grab whatever looks good, that´s what I did.”

Being actually content with the equipment we originally received, Sally and I were left with the garbage (Fucking awesome!) The individuals that took our gear were already down the sand hill and walking toward hill number two.

For anyone that thinks sandboarding might be fun and resemble snowboarding, save your money. You point your board down hill and lose speed as quickly as you gained it. Your weight has to be to the extreme back of your board like riding on powder and you can´t carve without the fear of catching an edge and shitting sand for the next week.

Another ten minutes of driving and we got to the big sandboarding hill. No shit, it was big. The group of us that knew how to snowboard were actually excited. That was until the first person went down the hill. He bombed straight down at the local guides request. The guide informing us that carving at high speeds pretty much ensured a broken neck. The kid made it 5/6 of the way down until he turned into a dust cloud, with random parts of his body peeking out to show just how violently he was flipping head over ass. It was enough to slow the rest of us down and make us cut the hill into thirds. Taking one section at a time, thinking it would be better to look like a pansy rather than find out just how far from a hospital we really are. The “cheapo´s” that went with the traditional board bombed down the hill laying down head first, yelling with excitement and adrenaline, rubbing in just how stupid the “professionals” were. 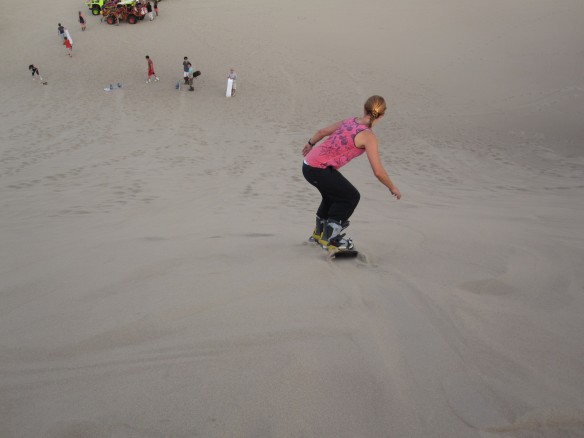 We ended our tour with a final 10 minute lap around the dunes. Our driver must have been excited about beer thirty being right around the corner and gave us one or two pushes on the gas. We pulled back into our hostel and it was a scramble for the showers. We packed up all of our shit and jumped on the 8:30pm overnight bus to Arequipa.