The Colca Canyon is twice as deep as the Grand Canyon and for the purpose of this blog post and false motivation for me to actually hike it, the deepest canyon in the world 3,650′ (4,160 m) deep.

The three-day trek of the Colca Canyon started off with a 3:00 AM pick up.  We stumbled groggy eyed to the 15 person van and as we opened the van door we discovered we were one of the last stops.  Based on the expressions of the other travelers they were equally enthused with early morning pick up.  The guides greeted us and welcomed us to the tour.  They explained the coming events as they passed out pillows and blankets.
Day One –
Drive to Chivay (three hours away) and have breakfast.  Followed by a 40 minute stop at Cruz del Condor with the hope of viewing the massive Condor birds.  Our final stop will be at the top of the Colca Canyon where we will begin our four-hour descent to the base (2100 meters / 6889 feet – were we climbed) and trek up part of the other side of the canyon to a small village for lunch.  Then onto another village an hour away for dinner and accommodation.
Day Two –
A three-hour walk to the Oasis, a collection of accommodations at the base of the canyon.  There we will chill out by the pool, eat lunch and dinner, and prepare for our 3.5 hour climb out of the canyon (over 1,000 meters / 3,200 feet) up.
Day Three –
5:00 AM start time to trek up the canyon.  We then eat breakfast at the top and head to the hot springs in Chivay.  After the hot springs we enjoy an all you can eat buffet and head up to the valley of the volcano’s.  We stop to take photos at the highest road accessible point (4,900 meters / 16,000 feet) and then head back to Arequipa.

The drive to the canyon was confusing to say the least.  In and out of sleep, awaking short of breath and encapsulated by darkness.  When the sun finally cracked the mountain top I rubbed the fog from the window and was shocked to see the ground covered in snow.  The hotel where we were staying said only to bring warm cloths for the night. Here I was sitting in shorts at 15,000 feet surrounded by snow.  A few more hours passed, a few thousand feet lost, and my confidence in my apparel was slowly restored.  We pulled into Chivay no better rested then when we started drive and we´re greeted with the traditional Peruvian breakfast:  A white bread roll, jam, and cheese.  Not exactly how we planned on fueling up for our hike but it did the trick.
The Cruz del Condor was our next stop and it proved to be a great day for viewing the massive birds.  Three of them entertained the group of spectators by gliding in and out of the canyon.  Several times dipping out of sight blow the canyon wall and emerging merely 20 feet from the crowd swooping directly over our heads.

We then headed for the start of our trek and arrived at the trailhead around 10:00 AM.  It didn´t take long for the rocky switch back trail that worked its way down the canyon at what felt like a 70 degree angle to remind me just how much I hate hiking.  In kicked the heat as the sun poured into the canyon and I was thrown into an Afghanistan flash back of misery.
“Who the fuck in their right mind does this shit for recreation?  Oh, I have an idea!  I am going to stumble my way down a rocky canyon trail and try my best to get sunburned, roll an ankle, step in donkey shit, and sweat my ass off.  Better yet, I am going to pay to do it!”
It was later disclosed that Sally was also not enjoying the first leg of our trek but didn´t want to fuel my excuse to complain.  On our way down we began to chat with members of our group, which to our amazement would later be dubbed by our tour company as “The Most Kick-Ass Group Ever To Climb Colca Canyon”. A plaque to commemorate the group is hanging in the tour company´s office and they are working on a mural portrait of the group that will span the entire depth of the canyon.
The group consisted of two Kiwis Woody and Sarah, Lyn – an American that is one year deep into her travels (hero), a Hungarian girl Diane (pronunciation varied throughout the group) who´s booming laugh was contagious and could be heard the entire length of the canyon, and our guide Cheeky. 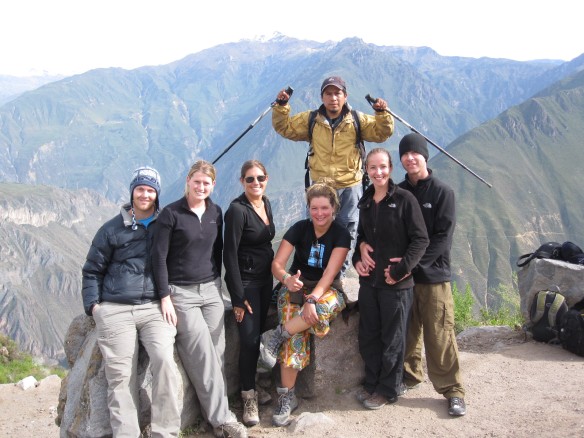 After four hours of going straight down and hating every minute of our lives, we arrived at the base of the canyon.  A short break to collect our group and we were across the bridge heading up the other side of the canyon.  We came to the first village and had a set lunch.  We had the option of crashing there for the night or trekking on for another hour to the next village.  The group agreed to keep on keeping on.  The benefit being the following day we would arrive at the Oasis earlier giving us more time at the pool.
The last part of our trek to the second village was a “test climb”.  A fairly steep 20 minute switch back trail that mimicked what was in store for us the last day.  Cheeky mentioned the record time for the climb was 7 minutes, a German man who practically ran up the hill.  Team America World Police theme song instantly came to mind, “America, fuck yeah”.  I bulled up the trail with a quick pace that caused me several stops to catch my breath.  Sally had the watch and told me to yell out when I got to the top so she would know to mark my time.  I caught up with two guides on the trail that commented on my quick speed and I was feeling fairly cocky. I got to the top with barely enough breath to scream out to Sally.  “Nine minutes” she said.  Fuck yeah, not to bad at all!  My ego had only a moment to pat itself on the back before Sally came around the corner 30 seconds behind me and breathing half as heavily as I was… Ah, the catch 22 of having a fit wife.
The second village proved to be a wise choice.  The rooms were pretty set up, the showers had hot water, and the little store had a couple dusty bottles of rum for sale.  Sally and I decided drinks were a must as Cheeky told us the following day was only a two-hour hike and mostly flat.  I was greeted by Woody at the store front who had come to the same conclusion.  The first bottle was enjoyed on the dinning room patio that faced out into the impressive canyon.  The second bottle fed us the motivation to help Cheeky in the kitchen.  We diced vegetables as guinea pigs scampered around our feet.  Not on the menu tonight, but a common dish in Peru.  The meal with the addition of rum and our 2am wake up was enough to crash the party in the wee hours of 9:00pm. 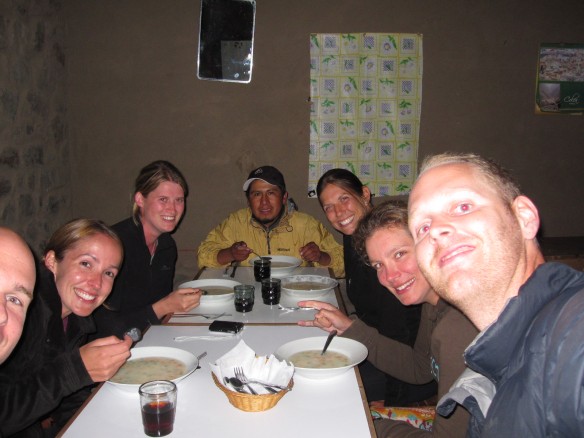