Picasso was credited with the expression, “Good artists borrow, great artists steal” and when the picture illustrates a two-story apartment with kitchenette, fireplace, amazing views, and a sticker price of only $46 a night, who wouldn´t sneak past security Mission Impossible style and jack this great idea!?  Ok, there was no fake finger prints, smoke to detect the motion lasers, or dropping down from the ceiling.  We simply emailed them and asked about the details.  Of course not wanting to disappoint my high school English teacher we must always cite our source.  Davin and Leigh are friends from Seattle that set out on their journey a couple of months before us.  When they posted pictures of Las Olas we knew instantly it would be included on our trip.

A quick three-hour bus ride from Puno and a trip across the border brought us to Copacabana, Bolivia.  A small border town that hugs one of the many harbors of Lake Titicaca.  Most travelers spend a couple of hours or a night in the fairly touristic town on their way to Isla Del Sol or La Paz.  At the border we almost had to fill out the extra form at customs for having a suitcase full of cash on us because Sally had heard there was no ATM available and didn`t want to be short on cash.  (Thankfully things have changed, an ATM opened just this last January!)

We were not let down when we opened the door to our Turtle Suite.  Three nights in the best accommodation we have seen to date and will probably see on the rest of our travels. This is what we had been waiting for, Bolivia, land of the cheap!  We bought a couple  of $3 bottles of wine, an eleven dollar bottle of one liter Baccardi Rum, and nestled in.  We rarely left our estate and when we did it was only to grab some food to cook up or the occasional restock for our bar. 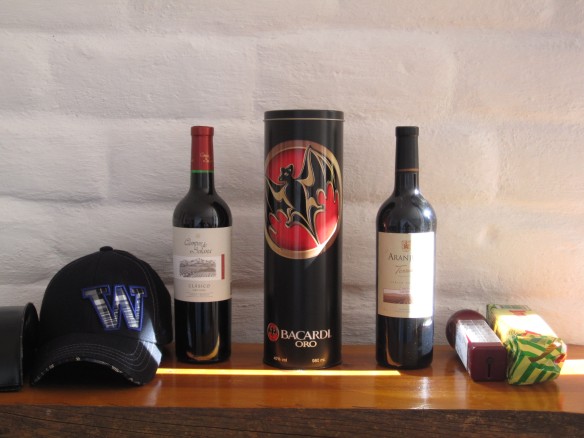 Our time in Copacabana proved to be extremely useful as I finally figured out a way to beat Sally at Rummy.  I simply have to drink her under the table.  A task that I am normally comfortable with, but unfortunately seems to take a bit longer these days.  We finished up our time at the Turtle Suite with me only being two games behind on our all time running score.  The closest I have been in about a month.

After our three-day pampering time we caught a 8:30am boat to Isle del Sol.  What looks like a quick half hour trip on the map takes about two and a half hours on a boat that would be made fun of for being slow by the short bus passengers.  The “wake” behind the boat would actually leave a visible trail through the water when both engines were fired up.  Thankfully we felt pretty safe on the boat as there is a strict policy that all vessels emit large amounts of smoke to ensure they are easily spotted from a distance.

We were dropped off on the north part of the island and hiked our way through the Incan ruins to the village of Yumani on the south part of the island.  Thankfully Sally did her research and we were prepared for the extensive checkpoints where the locals charged various amounts of money.  Other hikers were not as prepared.  It would be a flip of the coin to decide who had the honor of being the Stingy Dick Head of The Day.  An Argentinian who debated the 15 Bolivianos (about $2) checkpoint for ten minutes.  Yelling at the unphased local in Spanish about how he was being ripped off, or the Scandinavian who thought his sarcastic English and pouty body language would go unnoticed when asked to pay 5 Bolivianos (less than $1).  This large amount of money of course deeply hindering the tourist, while frivolously being spent on booze, snacks, and cheap accommodation by the local.

Once we got to Yumani we had lunch at one of the few restaurants that would serve us during the break between lunch and dinner.  Thankfuly the food was excellent and only out done by the view.

That night Sally regained her staggering lead at Rummy and has actually been asked by the South American pro-circut if she would like to become a regular.  I would say that my ego was flushed down the toilet, but they don´t flush anything that is not human waste here and I don´t think my self-worth is that deteriorated yet.  No, it is more likely found in the used toilet paper bin right next to the shitter.

The next day we made our way back to Copacabana and are headed to La Paz tomorrow.