Jeffreys Bay is noted as being strictly a surf town.  The word on the street (Bazbus) is that unless you surf, you’re really not missing anything.  But the fact is, we have been enjoying South Africa so much that we already feel like every city we pass by without visiting, we are missing something.  So we headed to Jeffreys Bay with only a marginal intention of catching some waves and more of an emphasis on catching the game.

The Waikato Chiefs were set to play the Durban Sharks at 9:30am South African time.  We booked four nights at the Hard Rock Backpackers, which surprisingly contradicted your initial assumption of what an establishment like that might provide.  Extremely clean, well run, and bedding that didn’t smell like ten years of sweat, urine, and um. . . other nasty shit that one can only assume has been collected by the ten-year old, yellow stained, torn, poor excuse for a blanket. (i.e. Takweni in Durban).  If you tried to give Takweni’s blankets to a homeless person they wouldn’t even take it for their dog.

Hard Rock is a block from the beach, has a big screen T.V. to watch the olympics, and (the owner) Dick is cool!  Wait, that doesn’t sound right.  I mean Dick is really nice. . . no, not comfortable with that one either.  Dick is fun to hang out with?  Fuck.  I don’t even think he goes by Richard, Dick is in fact his name. Lets just say the owner is a good guy.

We had scouted the bars in the area the day before.  When we walked into @Work and asked about the game the girl at the bar pointed out every T.V. in the bar, “It will be on that one, that one, those two, this one, and the big screen right there.  We will be serving breakfast, burgers, and are expecting a big crowd.”

That’s the shit we’re talking about!  The game plan was laid out.  Wake up at 6:00 and get in a quick 40 minute run (hey, you have to do something to justify drinking that early in the day), get to the bar around 9:00 to beat the crowd, enjoy the game, but keep it modest.

We walked into @Work and happily found ourselves a spot at the bar in front of one of the flat screens.  The bartender asked us if she could get us anything.  I paused for a moment to give it some thought.  Beer is of course the cheap option but not really on the brain at 9:00 in the morning.  I could grab up a screw driver to try to score some vitamin C, but mixed drinks tend to add up pretty quickly on the bill.  I did a quick scan of the room to look for some inspiration.  The guy on our left was drinking a coke on ice.  They guy on our right had what looked like a fresh beer that he was struggling to put back.  Fuck.  I reluctantly decided to go with a beer.

Sally belted out Jack and Coke faster than lightning strikes.  The bartender smiled really big with an impressed look on her face.  It also caused the patrons to our left and right to nod with amazement.

Fucking shit Sally! Now I look like the punk because I was trying to stick to our “game plan”.  I quickly changed my order to make it two Jack and Cokes.  “Just these two and then we’ll have a couple of beers” Sally proclaimed.  No worries I thought.  JD did sound more appealing than beer and if it’s just one round, it will be fine.

A tiny Kwaussie ordering a Jack and Coke at 9 in the morning and an accent that clearly was not in support of the Sharks was all it took to get the attention of the people around us.  Introductions were made and a second round was bought.  We held true to our intentions and went with a beer.  I was in the mood for something a little more crisp and decided to go with a light beer.  After the cap was popped off and I took back a swig Sally noted that light beer in South Africa is similar to light beer in Australia.  Meaning that the light stood for less booze not fewer calories.  What the fuck!?  This is blasphemy!  I checked the bottle and sure enough, 2% alcohol.  Who in the fuck wastes their money on a beer that doesn’t have any alcohol in it?  More importantly, I have been drinking this shit off and on for three weeks now and this is the first time she decides to mention it to me!

It didn’t take long for the Chiefs to score a try.  Reluctant to yell, high-five, and rub it in the locals face, Sally chose the more respected way of celebrating, buying shots for us and our new friends.  Ten minutes into the game and we already covered next months rent for the place.  That was enough to grab the owner’s attention who decided to work the bar for a while down on our side.  More scoring, more shots, the more friendly we became with the locals.  The owner now started matching our shots with complementary shots of his own.

The Chiefs ended up smacking the Sharks around like Ike beat on Tiny.  I watched as the faces in the bar became less interested with what was on the T.V. and more interested in staring at the beer in front of them.  The game ended and so did any shred of hope that we would leave the bar when it did.  Our first name bases with the owner and a few of the locals had us kicking back drinks right through lunch and well into the afternoon.  For the sake of our parents we won’t mention the actual amount of time and money we spent @Work.  Lets just say the cultural exchange was a success.

During our time @Work, we found out that Dicks dog Mustang from the Hard Rock was a frequent visitor.  He hops the fence, runs to the bar, and sits on one of the bar stools.  The entire act of escaping the hostel to head to the pub sounded funny to us at the time, but didn’t fully register.  It wasn’t until the next day when we witnessed the act that we truly appreciated Mustangs love for the bar scene.  He crept to the fence of the hostel, looks back over his shoulder to make sure he is in the clear, then hops the fence with ease.  I ran out of the hostel to chase after him.  As I came out onto the street and attempted to call him back, one of the neighbors reiterated the story we heard the day before.

“He’s just going for a pint mate.  He does it almost every day.  Comes to my yard to fuck with my dogs, takes a shit, then he’s off to @Work. ”
Now that, is an awesome dog! 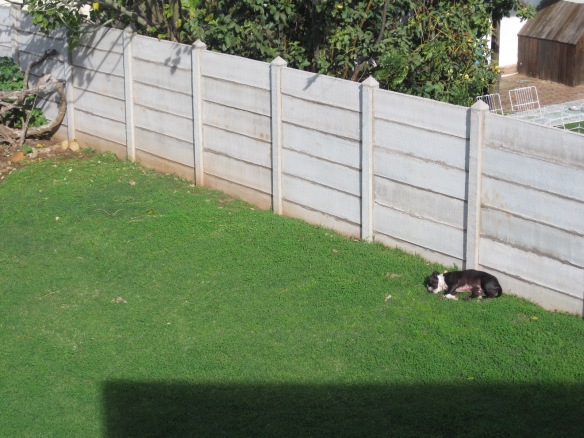 Jeffreys Bay had an interesting effect on us.  We didn’t spend an extensive amount of time there and the weather was pretty much shit (minus the one day we spent in the pub, figures. . . ).  But we found ourselves in love with Jeffreys Bay.  It seemed like just the place we could imagine ourselves.  A small beach town where you get to know the people around you.  Great weather (most of the time), good pubs, awesome beaches, and right in the heart of the garden route.  It was enough to make us seriously open the conversation about living in South Africa.