Life as a civilian has been nothing short of wonderful.  I have a beautiful wife and am living out my (our) dream of traveling the world, I went to college and got myself educated, I even held down a legitimate office job for 8 whole months!  There is nothing I would change about who I am or what I am doing.

There are some simple realities I have been faced with since I left the Army.  First and foremost, I will never be doing anything in my life that even comes close to being that cool, ever, again.   That discipline of waking up in a flash at the sound of a pin dropping, being able to comprehend my surroundings, and knowing what needs to be done.  Has been replaced with the snooze button and confusion as to why anyone would ever want to get out of bed.  Sleep, ah the wonderfulness of sleep.  What used to be considered a luxury is now a necessity.  Eight hours.  If I don’t get at least eight hours I feel as though I have been cheated and will proceed to conduct myself in a manner that a child would note as being immature.

These are just a few of the things that have changed since leaving the Army.  However, the most important thing or I should say question that arises, is when I look at myself in the mirror.   When I look at the man I am today I can’t help but wonder, is Bret Armstrong in fact now, a pussy?  Has he gone soft?  Of course any of my Army buddies, being the strong emotional supporters that they are would quickly assure me that wasn’t the case.  Because in order for me to ‘now’ be a pussy, that would imply that at one point I wasn’t a pussy and that simply isn’t the case.

The fact is, the natural and quick transition into a well oiled killing machine, now feels like a distant memory.  As if I was reading a story that in no way relates to me and now that I have put the book of badassness down, I realized I was really just standing in a public library, caught up in a nice piece of fiction.

Unfortunately, there is no way of really knowing the answer to this question.  Short of signing back up and joining those fucking bad asses out there still doing it.  Oh, and so there is no confusion, I am strictly referring to grunts (and the odd medic who is known to bury his weapon or a hand full of FO’s).  The guys that actually know what war looks like outside the wire.

Nope.  The simple fact is, the only way I can attempt to get my heart racing is through stupid gimmicks that any person with a handfull of cash can do.  I fully realize that it won’t bring me to the level of excitement and fear that is attained by being shot at or jumping our of a plane for the first time.  But my love for freedom is greater on the actual enjoying it side, then it is ensuring it is available for others. 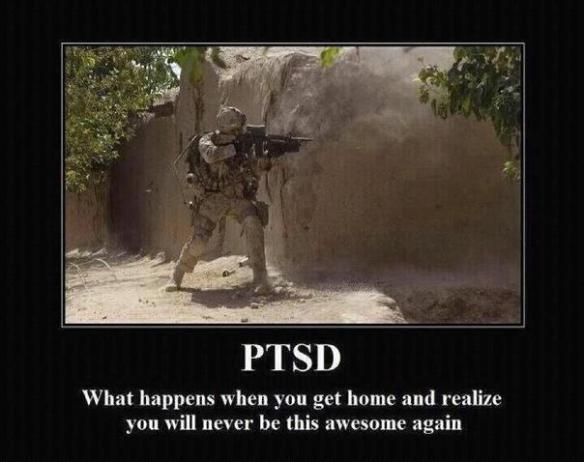 Gimmicks.  Some better than others, but mostly all the same.  A safe way to try to trick yourself into the thought that you are doing something scary. Dangers. Death defying. (Don’t get me wrong, these things are actually fucking scary if you have no measuring stick in which to judge them.  Shit, I was once scared of the monster in my closest.)  But all within the boundaries of being relatively safe and of course always being degraded by the 90-year-old man or 13-year-old girl who did it before and after you.

None the less the gimmicks are all that I have left and the fact is, I am starting to kind of like them.   Thus, when I caught wind that the highest bungee bridge in the world just happened to be in South Africa, I guess you could say I jumped at the opportunity (that one is for you pops!)

The bridge stretches across a canyon on a major highway road heading down the Garden Route of South Africa.  The bridge is 216 meters / 708 feet.  The day I decided (had to go) was off and on showers.  This actually worked out to my benefit.  Only one other jumper was set to go during my jump time.

They have jumpers walk across scaffolding that is hung under the highway. The steel mesh walkway enables you to watch as the ground disappears below you.  The five-minute walk to the center of the bridge lets you fully understand the height of the bridge in which you are about to throw your body off of. 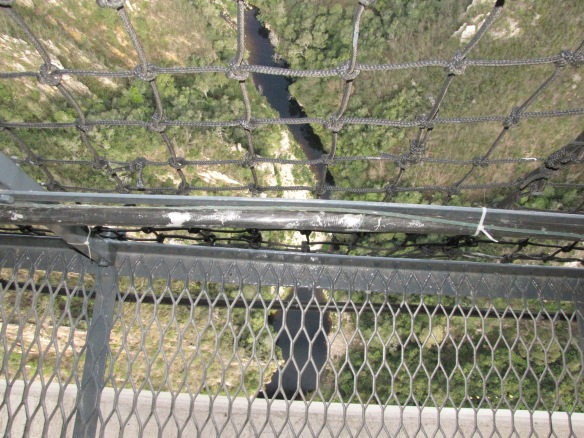 As I walked down the steel walkway my heart barely skipped a beat.  I couldn’t shake the gimmick factor of the whole experience.  Granted, it is the biggest bridge gimmick in the world but a gimmick none the less.  I told myself not to be concerned with the “thrill” factor of the experience.  But to rather focus on what I really do love about this sort of gimmick, the weightlessness of speeding toward the ground from large heights.

The entire jump process felt like a NASCAR pit crew servicing a race car.  I was heading back toward the office to collect my pictures before I knew it.  In hindsight I should have mentioned that I wanted to stand on the edge longer then the five seconds they give you.  I wanted to take in my surroundings and fully understand the jump I was about to make.  I mentioned this to one of the guys on my way off of the bridge and he stated that they have too many people freeze as it is.  Monsters in my closet I thought to myself, fucking monsters in my closet. . .