Vientiane, is the capital of Laos and more importantly, the final resting place for my twenties.  It’s not exactly the Hangover-esk, Las Vegas up all night, party my ass off setting I would fantasize about commemorating my decade of awesomeness.  It’s hard to imagine a wild and crazy night in a communist country that shuts down all of its bars at 11:30pm.  Not that I’m complaining.  In the same way I wasn’t disappointed in not having a bachelor party.  My whole life was a bachelor party.  The way I see it, if you saved all the gas in your tank for that final quarter-mile, putting along in the slow lane, going five under the speed limit, only to think slamming the pedal to the metal at the last second is going to some how compensate for all that lost time, your fucking high (and if that’s the case, maybe on your way to a great night as well).

Nope.  Like a proud father watching his son grow up, I reflect back on my twenties with great satisfaction.  Ready to let go and progress into my thirties with ease.  It helps that I started balding when I was 17, my metabolism is already slow as shit, and thanks to Uncle Sam my body started falling apart seven years ago.  So there is nothing physically daunting about my thirties I need to worry about, and I already conducted my mental preparations in Storms River.

That being said, it wasn’t like Sally and I were going to let the day go by unnoticed.
All I wanted for my 30th was to have a day with zero regard for the budget.  After traveling for seven months, the constant scribbling of every-fucking-little-thing can become quite tiring.  “Looks like its cup-of-noodles tonight for dinner because Lonely Planets expected cost for transportation was off. . . again.”

Luckily the dollar goes alright in Laos.  Nothing like in Bolivia, where you can live like a king for next to nothing.  But better than Brazil and South Africa.  Actually the cost of Laos is almost on par with Thailand.  But thanks to our good friends at Lonely Planet, we budgeted $20 less a day in Laos then we did in Thailand.  Some words of advice when planning a trip using the ‘Bible of Backpackers’.  First, check the publish date.  An old Lonely Planet is about as useful as having a flotation device during your overland flight.  Second, always take into consideration the fluctuation of the exchange rate and inflation.

For example: you based your research off a book that was printed over a year ago, you are going to be on the road for an extended period of time and won’t reach your destination for an additional 7 months, your country’s economy goes to shit, and BAM, your expected $15 bus ride is now $27.

But thanks to the wonderful philanthropists at Bank Mom and Dad, we had a little extra cash in our account to help celebrate the occasion.  The plan was fairly simple.  Drink, heavily.  Drink until we felt like our only two options were to either pass out in the middle of the street or grab some food and shove it in our face at a rate of speed that would revolt other diners and surely force the owner to ask us never to return. The steady diet of fried noodles and rice we had been consuming for the last month and a half created a strong desire for a slab of bloody meat.  A decision we did not take lightly.  We spent over an hour researching where we could find the best steak in town.  After an equal amount of time dedicated to deliberation, we finally decided on Xang Khoo.

The stage was set, the final destination selected, and the final walk through of how we were going to conduct the mission.  You want to make sure that every soldier understands what the objective is and how you’re going to reach it.  Shit gets crazy when the drinks start flying.

We decided to lay down a strong foundation for the night by enjoying a light lunch at Joma.  A chain coffee shop / bakery that offers a nice selection of overpriced drinks and food.  We had ventured into the Luang Prabang Jomo everyday during our stay.  We gawked at the menu and imagined what we would order, then walked down the street to the night market and both ate for less than what a mocha would have cost.  Not this time, this time was different.  It felt like I was opening a Wonka bar and reveling the last golden ticket.  A wave of excitement for finally being able to join all the over-privileged and actually place an order.

“Would I like to make that Ruben a meal?”

“An additional ten thousand and you can choose a special salad.”

Special, me?  You better fucking believe it. 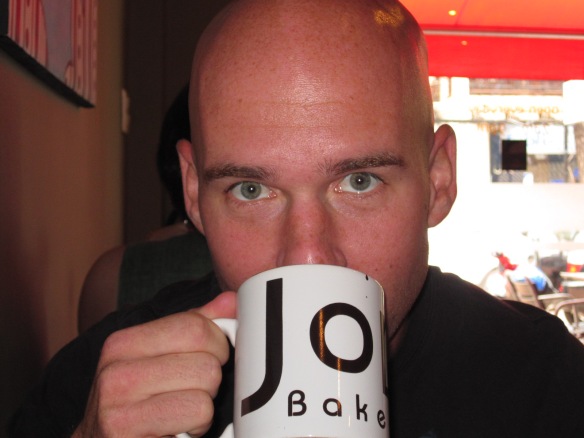 We had a couple of hours to kill after lunch before we could start our drinking sprint toward dinner.  We didn’t want to become a traffic hazard at 3:30 in the afternoon.  A pathetic attempt to kill time had us venturing down to Vientiane’s relatively new mall to try to watch a movie.  Apparently the evil communists in charge don’t think malls should have movie theaters.  Other than a much welcomed AC break, the mall really doesn’t serve much of a purpose.

We had managed to fend off the premature celebrating until 4:30pm.  Of course we had scoured the area for several days, sorting out the best locations to indulge in our over spending.  It was Long Island Ice teas, Jack and Cokes, and anything else that was always too expensive to justify on a regular day.  By the time 9:30pm rolled around it was clear (or rather hazy) that food was becoming a necessity.  We stumbled our way to Xang Khoo  and ordered industrial amounts of wine.

The meal proved to be a success.  The meat was cooked correctly and was a nice cut of fillet.  It was originally supposed to be accompanied by a side of fries (WTF?  Same experience in Colombia.  A nice establishment and a potentially wonderful meal, tarnished by throwing fries on the plate.  Why don’t they just serve it in a box and give me a fucking ten-cent toy.).  Thankfully I noticed mashed potatoes available with one of the chicken dishes and opted to switch it out.

By the end of the night we had managed to burn our way through 10,000 Kip short of a million and-it-felt-great!  For those of you that have had the wonderful opportunity to enjoy an adult beverage with myself and my wonderful bride, you are fully aware that we have the ability to make Andre the Giant look like a light weight.  That combined with our exquisite choice in cuisine may have you wondering just how much money is a million Kip?  I realize the strenuous task of opening a second window and googling that shit is out of the realm of possibility for a majority of our readers, so I will just tell you.  It’s about $125.  I know, how awesome is that!?  A night like that would have cost us upward of $500 in the States.

You can usually gauge the quality of the night before by your level of desired movement the next day.  To say we didn’t do shit would be an understatement.  Sally managed to drag me out to the Lao National Museum that happened to be about a block away from the guesthouse.  It wasn’t AC’d and I wasn’t interested so the tour consisted of me making my way from fan to fan while Sally read through the history of Laos.  The museum its self isn’t very well-funded and parts of it look like a diorama constructed by a third grader.  It’s not what one would call ‘content heavy’.  It consists mostly of pictures with a few sentences below describing the photo.

The following day we made out way to the ancint Buddha park.  The park is full of different Buddhas and Hindu statues dating back to the 1960’s. . . but looked much older.  There are of course several different ways to get to the park that is conveniently located 30k’s from the city center.  You can risk your life on a scooter, grab a tuk tuk that will charge you more then you spent on your 30th birthday night, or be a real traveler and catch the local bus.  Unfortunately we didn’t have enough cash to do either of the options we preferred, so it was a long and painfully hot trip on the local bus.

Our last day in Vientiane found us peddling our way to the Cope visitor centre.  Sally had expressed interest in the now permanent exhibit at the National Rehabilitation Centre.  I wasn’t really sure what to expect but understood that the pansy dragging of my feet I did the two days prior obligated me to pretty much do anything she wanted.  We were greeted at the door my a young boy who appeared to be no older than 15.  Pinched between his bicep and side he held a white and red stick.  Both of his arms ended just past his elbows.  His large smile and warm attitude instantly made us feel at ease as he cheerfully asked where we were from, how long we had been in Laos, and what we enjoyed most so far.  After our introductions were made he left us to the tour.  The whole exhibit only takes up a room that is about the size of a basketball court.  But the way in which it is laid out and the information it provides is extraordinary.  It talks about the ‘Silent War’ in a very real and straight forward manner.  Starting first with simple facts.  The types of explosives that were used and the amount of bombs dropped on the country, right from the U.S. military record books.  The focus of the exhibit is only momentary placed on the tremendous loss of life during the actual time of conflict.  Its main objective is to share the stories of the thousands of lives effected by the 80 million + UXO (Un Exploded Ordnance) left waiting to claim lives after the war.  To this day there are still hundreds of Laos deaths and injuries each year from a military campaign that ended almost forty years ago.  The Centre shares the stories of those who have had to deal with this lingering collateral damage.  Their trials and tribulations, struggle to get proper prosthetics, and the hugely underfunded programs to help them function in society and aid in the removal of the threat for future generations.

The exhibit leaves you speechless and cringing at the unfortunate catastrophes mankind is able to inflict upon one another.