Three bus trips into our time in Laos and we are fully confident that they have a very different interpretation of what VIP stands for.  The cramp, old, and unclean sweat boxes usually have their toilets out-of-order, luke warm air blowing dust around, and the driver pounding away at the engine block each time we make a stop.  The very thought of an overnight journey in one of these cattle cars made us cringe in disgust.  Of course Murphy’s Law would have it that the only way to get from Vientaine to Pakse would be in the grim cover of darkness.

As our mini-van pulled into the bus terminal we immediately began to search for the torturous device that would inflict its restless night of sleep upon us.  We were greeted by confusion and shock when we spotted several buses that appeared to be made after 1995.  The interior lights displayed full beds divided into compartments.  They looked bright, clean, and spacious!

Unfortunately we didn’t end up getting any of the cutting edge buses constructed during the era of gangsta rap.  But we did get a pretty decent ’89 that outshined a majority of the remaining fleet.  We crawled to the top-level of the bus and found our compartment located near the back.  The single bed sized cubby whole was just a couple of inches short of perfect.  Sally and I cozied into our evening quarters and smiled at each other with surprised content. 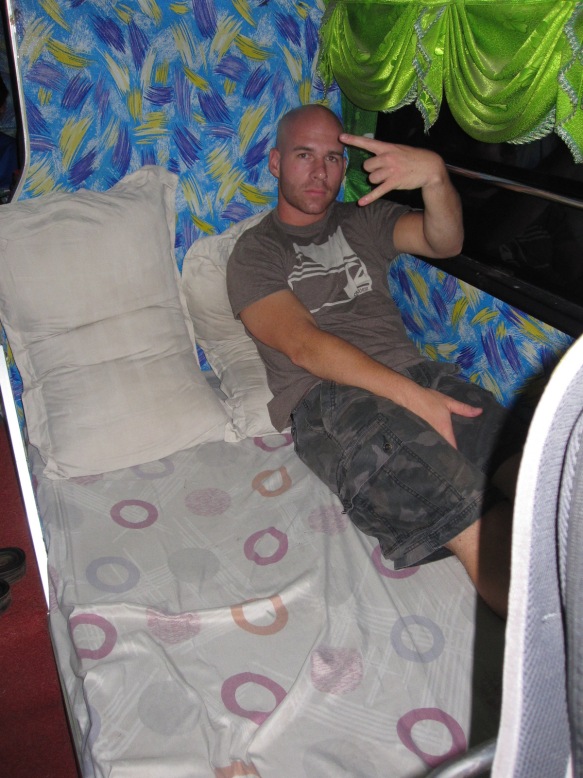 I was closely watching the bed across from ours in the hope that it would remain vacant and I could stretch out on my own.  Unfortunately a teenage Laos kid slid into this spot just a couple of minutes after us.  Shortly after he sprawled out and plugged into his ipod, his bed mate appeared at the top of the stairs.  A middle-aged over weight man checked his ticket twice and sighed with disappointment when he realized it was going to be a full bus.  Watching the two of them ‘settle’ in for the night was enough to make anyone observing the act uncomfortable.

It wasn’t really the full nights sleep we were hoping for but it was better than being stuck in the seated position all night and surely better than being snuggled up to a snoring old man who takes up 90% of the bed.  We stumbled off the bus at the crack of dawn, disoriented and confused about whether or not we were at the correct location.

Similar confusion was happening with other passengers.  The outdoor benches that made up the bus station didn’t indicate our location and the bus drivers only word of English wasn’t exactly shedding any light on the situation.  It wasn’t until they started throwing all of our bags into the street and drove off that we realized this must be Pakse.

We thought our guesthouse was close, but the long night of poor sleep combined with the early morning arrival had us feeling pretty lazy.  We asked a tuk tuk driver if he knew where our guesthouse was and how much it would cost to get there.  10,000 kip each was enough to coax us into the back seat.  He pulled out of the bus station and took a right onto a completely deserted* street.  He then proceeded to drive away from the bus station for a couple of minutes until he reached a traffic circle.  He used the traffic circle to point us back in the direction of the bus station, drove by the bus station, only to take the next right and park in front of our hotel.  I found it amusing that he went to the extra trouble of making the journey seem longer to justify the cost.  But decided he didn’t over charge us enough to make the effort overly elaborate.

We had scheduled three nights in Pakse and once we got there we weren’t really sure why.  It seemed the only thing to do was to head out to a waterfall that was an hour drive away from the city.  We decided to save that adventure for our last day and used the first two days to explore the town.  A thirty minute walk our first day and a 10 minute bike ride our second, exhausted all the roads Pakse had to offer.  We found ourselves venturing out on an old country road to make use of the bikes.  The looks we received from some of the locals indicated that we were most certainly off the beaten path. 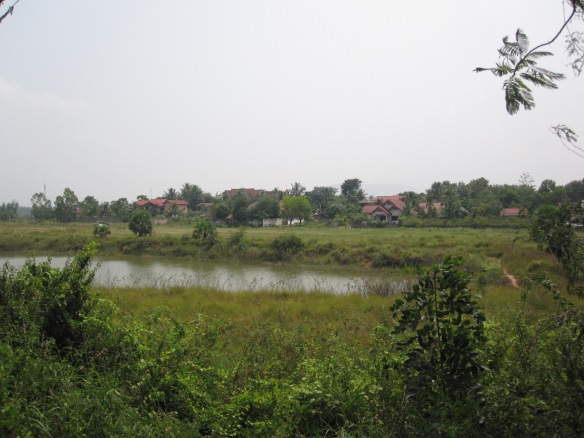 The hour-long scooter trip to the waterfall reconfirmed the notion that the novelty of utilizing this particular mode of transportation has long since worn off.  It also destroyed any hope of me ever joining a motorcycle gang.  As the scooters in Pakse were the first ones we have used that required us to shift gears.  I imagine I looked like an oversized bobble head as I hopped the bike down the street in such a pathetic fashion that the owner suggested I remain in 4th the entire time.  Not exactly Hells Angles material.

The waterfalls were nice and I was pretty happy that I could still find amazement in them after having been to Iguazu.  I assumed that it would be like sandwich life after I had a Ruben at I Love New York Deli in Seattle.  Every Ruben I try after, just…. well…. sucks.   (We’re having trouble with some of our photos so here’s a picture of the area surrounding the water fall). 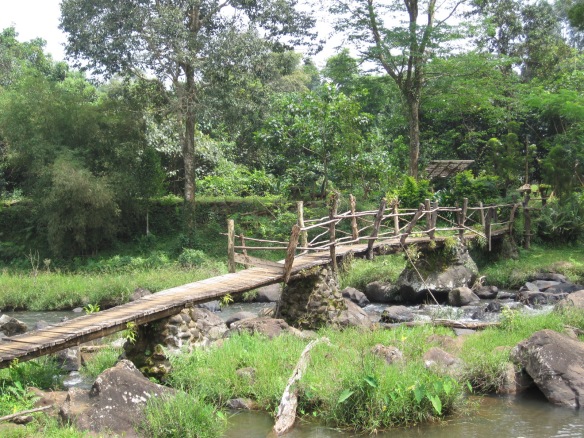 Our final day in Pakse brought us to the roof top of the neighboring hotel.  Their restaurant was perched on the sixth story and was by far the tallest building in the area.  It was enticing enough to make us decide that drinks at sunset would be a nice way to wrap things up.  It only took a couple of Beer Laos to get the indulgent juices flowing.  I composed a quick Powerpoint presentation using bar graphs and scientific equations that showed the correlation between cheap steak dinners (accompanied by red wine) and the shit inside your brain that makes you happy.  It was a compelling argument and proved to be enough to persuade my business partner to indulge with me. 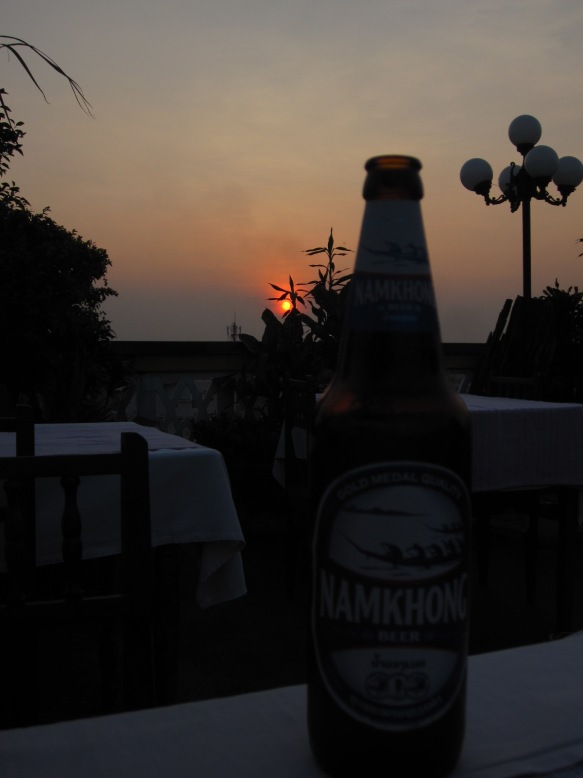 We decided to end our time in Laos relaxing on the river islands of Si Phan Don.  There are three main islands that attract tourists: Don Kong, Don Det and Don Khone.  The plan was to spend a couple of nights on the less touristic, more traditional island of Don Kong, then move on to Don Det and/or Don Khone.  However, after enjoying a few drinks one night in Pakse then realizing we needed to book a guest house, we mistakenly booked a place on Don Khone.  Not to worry, we were planning on heading there eventually anyway.

After a two-hour minivan drive (with Bret and I squeezed into the front seat next to the driver, with our bags) and a 15 minute boat trip down the Mekong River we arrived on Don Khone.  A tranquil island with a village feel and very friendly locals.  The large amounts of chickens, pigs, water buffalo, cats and dogs roaming the pathways had us feeling as though we were walking through an open farm. 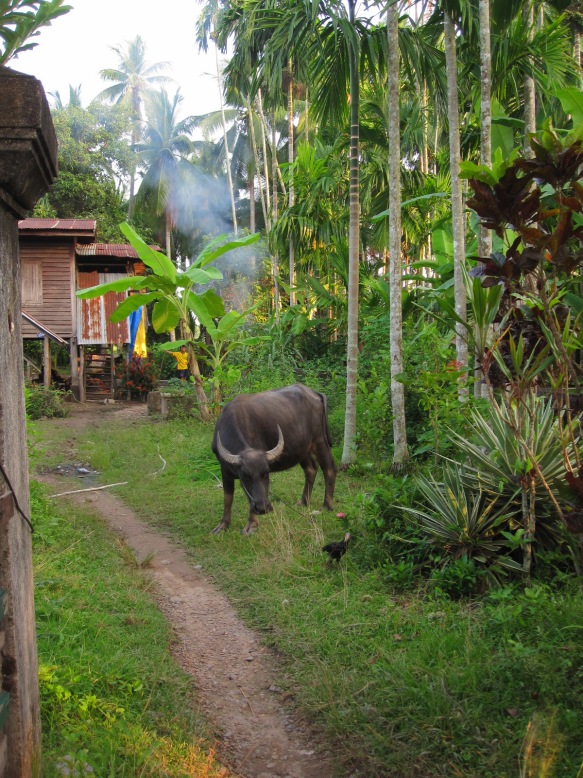 There is not a lot to do in this part of Loas.  There are a couple of activities to keep you busy but we decided to use this time to truly relax, write a few blog posts, research our next destination, read (yes, even Bret), and enjoyed the river view from our air-conditioned bungalow.  We did take one day to explore both Don Khone and Don Det on bicycle.  Seven hours of riding through the lush  vegetation , small villages, exploring yet another impressive waterfall and being greeted by friendly local after friendly local made the time fly by and it easy to forget the 90 degree heat.

Four days on the island and we were feeling refreshed, relaxed and ready for our next destination, Cambodia.

2 thoughts on “Pakse and Don Khone”